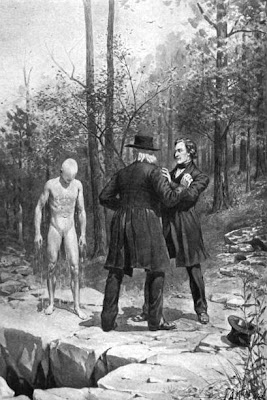 Joseph H. Cater, in his book The Ultimate Reality, has the following comments to make regarding the book Etidorhpa:

“ It is important at this stage to mention a book concerning the hollow Earth, the finest that has yet been written. It not only contains more important factual information than any other book, but also goes far beyond them in other respects. This great book probably contains more profound metaphysical and scientific truths than any other book written up to the present. The book is entitled Etidorhpa and was first published in 1895. Some books are written in the form of a novel in order to present certain ideas or truths without inviting undue -attack from various quarters. Etidorhpa is considered by most to be a science fiction book. Any intelligent and discerning reader realizes that it isn't.

The book concerns a story within a story. In Cincinnati, Ohio, during the 1860's, a young student of science had an unusual visitation from a mysterious stranger of striking appearance. This strange man, whose name was never revealed, extracted a promise from this student to publish a manuscript which the stranger was to read to him. The time of the publication was to be 30 years later. The manuscript was then read aloud over a period of time requiring many sessions. After the last reading the manuscript was presented to him along with sealed instructions to be opened at the prescribed time.

According to the subject matter of the manuscript, the stranger was taken into the hollow of the earth through a cave in Kentucky during the early part of the nineteenth century. His guide was a cavern dweller who was a member of a secret organization whose objective was the preservation of vital knowledge for the future enlightenment of mankind. The objective of this trip was the inner shell of the earth, where the nameless one was to receive advanced schooling in the mysteries of the universe.

The book Etidorhpa described this amazing trip through the caverns of the inner earth in detail. It also presented some of the philosophy and scientific truths the guide imparted to this man."