The Hollow Earth: Neal Adams and the Expanding Earth

Neal Adams and the Expanding Earth 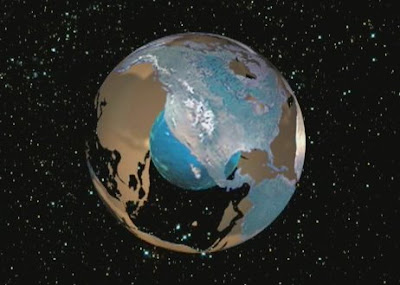 Neal Adams is a highly celebrated commercial artist who has helped create some of the definitive modern imagery of the DC Comics characters of Batman, the Green Arrow and others. Neal has devoted a substantial amount of time to the expanding earth model of planetary evolution in which all planets are in a constant state of expansion. This expanding earth model naturally and very simply explains the formation of all continents and very deftly takes into account and incorporates the popular theory of continental drift of the tectonic school of thought.

The expanding earth model, assumed to be accurate, lends credence to the hollow earth model as a necessary corollary. If all planets are indeed expanding, as Neal so vigorously asserts, then where would the "new" material arise from, thus filling these ever expanding celestial spheres? ... Wouldn't it make much more sense if, like an elastic, inflatable object, our planetary globes were filled with a less dense medium (such as air) and merely consisted of a denser crust which is stretched ever thinner over the course of planetary evolution? Perhaps the dynamo that powers earth's electric gravity is slowly weakening so that the planet ever expands as gravity gives way to the centrifugal acceleration of earth's angular momentum.

Watch some very professional videos and explanations offered by Neal on the subject of the expanding earth.

Great vids by Adams. Not convinced of the Expanding Earth theory but it does give pause. If true, then small planets could harbor life with similar gravity as larger planets.