The Hollow Earth: Mercator's 1569 Map of the Arctic 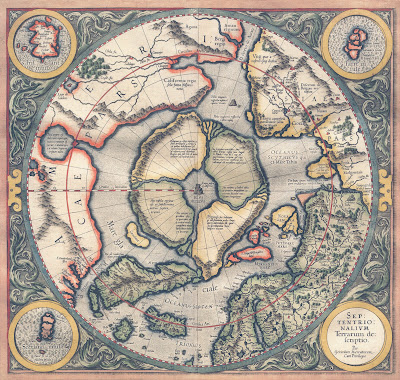 Mercator's map of the arctic first appeared as a vignette in his 1569 world map. The Flemish geographer and cartographer Gerardus Mercator's methods of map-making were so accurate and reliable that they are still commonly used today (recall the Mercator projection) and have remained virtually unchanged for nearly 450 years! His maps of Europe and the known world were exceptionally accurate and were commonly used with a great degree of reliability for navigation and commerce.

Bear in mind that prior to the advent of GPS and satellite navigational aids, exploration was the sole method of acquiring the data necessary for accurately portraying geographical details on a map. So, when we view Mercator's representation of the Arctic as containing a large landmass, equally divided into for sections by massive rivers, it stands to reason that this data was acquired by means of thorough exploration. It also is apparent that, according to the perspective of the early explorers, they had no glaringly obvious indicators to conclude that the land mass they were then encountering actually lay at the interior of the earth. Instead they assumed, as did many at the time, that the massive island or continent was actually an "island at the top of the world." Mercator's representation of the Arctic also very closely parallels the experiences of Olaf Jansen and his father in their exploration of the inner world.

So, it can be seen why and how these myths of an "undiscovered" northern region ... a land beyond the north wind came to be and how a man, so obsessed with details as was Mercator, painstakingly reproduced the knowledge he had in his posession on his map of the Arctic.

Have you talked to a geologist about all this?

I recall hear on one of the paranormal talk shows, Coast or 'Unraveling the Secrets' on blogtalk about a ancient map that detailed Antarctica's land mass which of course should be impossible. Very strange.

This mercator map is rather interesting. When you link the 4 rivers with the mountains at the perimeter you get a variation of the swastika

Looks like the swastika is an aerial x marks the spot to the entrance to the hollow earth as shown on the mercator map. Early antartic explorers also used land marks to help them navigate etc