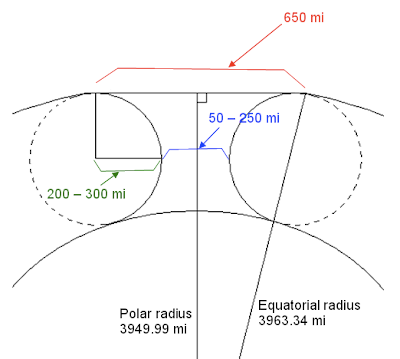 We have all heard that the earth is not exactly a sphere but more of an oblate spheroid due to the flattening of the earth at its north and south extremities. The flat part of the earth's polar regions is, in actuality, due to the absence of material where the openings exist at the poles. Many have often conjectured what the actual dimensions of the openings may be. With the known polar diameter of the earth, and its difference from the equatorial diameter, we can calculate (with a few assumptions) the size of the openings. Allow me to demonstrate:

* If the crust thins to a mere 200 miles at the poles, then the opening would be 450 miles for a theoretical range of 50 to 450 miles for the size of the polar opening.

My approximation is that the opening at its narrowest point is most likely 50 to 80 miles wide.

according to my explorations the hole rim is 1400 nm in dia. inner span 95 nm and the thickness of the crust close to the pole is 1050 nm.Therefor the hole itself is just 95 nm wide but it starts on 78th parallel.
Even if there would be available for great public clear photo of polar regions it will be hardly distinguished by inexperienced eye.Firstly because center of the hole is mostly covered by thick cloudiness and secondly because it is hard to distinguish the difference of the curvature towards the hole.

Aha. 1400 nanometer in diameter. Indeed, it will be hard to see such a hole from a satelite picture. But keep on searching!

The first post is referring to nautical miles not nanometers...

Who authors this blog?

Why hasn't anyone produced pictures of this hole ? It isn't difficult to get to Earth's polar area with today's technology using planes or vehicles. The polar areas are not always covered in holes and satelites which have the capacity to see objects as small as a person have never seen any holes at the poles. I think that the only hollow objects regarding this ridiculous website is the hollow heads of those who believe the Earth is hollow. When you guys actually travel to the edge of these polar holes and take pictures of it, then I'll believe you morons.

Interesting comments, can we discuss this perhaps exchange anonymous emails as well?

Its illegal to travel to the poles

I don't like the aggressive comment above. One more stupid troll among millions unfortunately. That said, with regard to polar openings: What about tilting of the earth rotational axis over the millions of years? If there were a reason to have openings at ther poles, they weren't always where they currently are. And then there is the tectonics. Especially if you buy into the expanding Earth theory. Take a look on Neal Adams website, he has nice video on this subject, and if it is true, polar openings could never have remained where they currently are (supposedly) for millions of years. But note otherwise that this expanding Earth theory would fit well with the hollow Earth theory (though without openings, and thus no life inside the Earth).