The Cellular Cosmology of the Hollow Earth 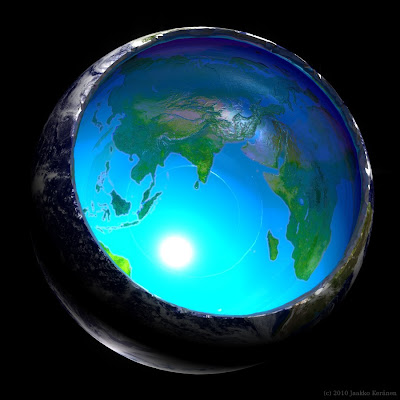 Back in 2008 a sports medicine doctor from Australia, Barry, posted about the science behind cellular respiration and drew parallels between the microcosmic and the macrocosmic of the hollow earth's 'cellular' respiration. I find it fascinating to come to understand the earth as a living, breathing entity. We have much to learn about the dynamo which drives and sustains life on a planetary level:

'Excellent work Shilo. I am a Sports Medicine Doctor. The earth is exactly like our human cells. The extracellular fluids that bathe the cells are controlled by Sodium chloride (in the earth's case as a "cell", NaCl-hygroscopic-is the controller of the oceans on the external surface). The intracellular fluids (inside the cell) are fresh water controlled by Potassium chloride the main controlling mineral salt of chlorophyll (hence the "green paradise" inside the earth). In an osmotic process the NaCl moves thru the cell wall from outside and the KCl moves from inside out. This is called the Na-K pump. This causes electrolysis hence these cell salts are called electrolytes & you find them in Gatorade & other sports drinks.

Ferrum Phosphate is the mineral salt controlling the cell wall. The electrolysis releases DC current which magnetizes the Fe (iron) and causes a magnetic North & South on the cell & a resting potential of 80-90 millivolts on average (organ-muscle-nerve cells differ slightly). All body generation warmth is caused by the ignition of phosphorus in the presence of oxygen. Like striking a match head (which has phosphorus) causes a flame. Iron Phosphate (Ferrum Phos in the Health Food stores) is the pre-eminent Biochemic Tissue salt of the 12 discovered by Dr W G Schuessler in 1888.

DC current from Electrolysis flowing thru iron causes the iron to become magnetic. Magnetism spun in a circle causes electricity (like a dynamo on a child's bike causes the headlight to light up).

Imagine the earth like a bucket with water in it and holes in its side rotating at speed. The water will be forced out the sides. The same with the earth. Volcanoes usually happen when acid lands meet alkali lands (eg the still above sea-level ramparts of the ancient land of Lemuria in the Pacific ocean - an old alkali land - meeting the emerging young acid American Continent = San Andreas Fault). As the white hot rocks become exceedingly fluid the water pressure from underneath makes its pathway up to the top of the new forming "mountain" and creates another eternal spring flowing down a mountain. Nearly all our permanent rivers are formed this way-Nile-Amazon-Orinoco-Zambesi-Danube etc. There are saltwater streams and fresh water streams under the earth as every water drilling rig will tell you.

The release of the energy of electrolysis in a cell tags nicely onto the proposed explanation of the energy released from the rims of the holes at the poles of the earth instead of from the Solar Stream. There is so much more but that will do for now. KEEP UP THE GOOD WORK.