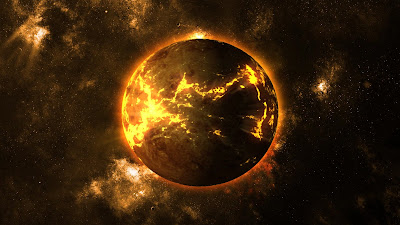 If we abandon the notion that gravity is an inherent quality of matter and is, instead, a manifestation of the electric dynamo of the inner sun which simultaneously generates the gravity and magnetic fields of a planet, then there are some interesting corollary ideas which come about as a result. One might ask, "Why then haven't we observed planets or large bodies which have no gravitational pull, if gravity is not an inherent quality of matter?" This is a very good question. What happens when the life force of a human body is extinguished? The body eventually decomposes, decays and returns to the primordial or constituent elements from which it came. So too, when a solar body looses its life force (electric dynamo), this body gives into the spinning centrifugal acceleration and becomes a loose conglomerate of asteroids or space debris. This is exactly how the asteroid belt came into being. What was once the asteroid belt used to be a planet. Some propose that it was destroyed by an asteroid impact or an errant comet. But, if this were the case, its remains (due to the conservation of momentum) would be scattered all over the solar system, not become arranged in a neat band which was previously the solar orbit of the planet. Instead, the life force was extinguished and the planet, having lost its gravitational pull, slowly decayed and fell apart, gradually spreading its remains in the wake of its orbit around our central sun, a testament to its once great existence.

So, here you have planets living and dying ... all due to the electrical force which gives them the power to sustain life. This is one example of how the universe will begin to make more sense when we abandon old notions and bring ourselves back around to consider ideas which conform more to visible reality. See if you can come up with some similar new ideas by asking questions and discovering the corollary imperatives of a universe with electric gravity. You may surprise yourself with the results!