The Hollow Earth: Hyperborea — The Land Beyond the North Wind

Hyperborea — The Land Beyond the North Wind 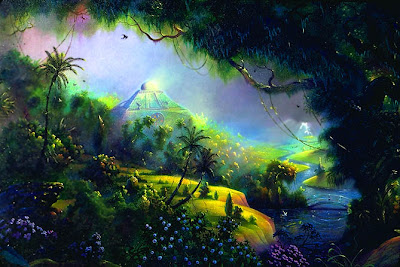 Hyperborea refers to an area in the distant north, from the Greek words hyper, meaning “beyond,” (as in hyperspace or hyperactive) and borea, referring to the northern wind (as in the aurora borealis). The land of the Hyperboreans was perfect, with the sun shining twenty-four hours a day and was a fabulous realm of eternal spring. The inhabitants of Hyperborea were giants with life spans of 1000 years and enjoyed lives of complete happiness without sickness or misery. The ancient Greeks were reputed to have dealings from time to time with the long-lived inhabitants of Hyperborea as recounted by their folklore and mythologies. We can also presume that the ancient Greeks were heavily influenced by the culture of the Hyperboreans (as well as that of Atlantis) and it is quite possible that much of their inspiration for their enlightened philosophy and architecture originated with the inhabitants of this fantastical realm as is evidenced by their literature and art.

This land 'beyond the North Wind' in its eternal state of spring and the giant stature and longevity of its inhabitants also matches precisely with the experiences of Olaf Jansen when he journeyed to the interior of the earth with his father in the mid-19th century.

"Jules Galdea explained to us that these revolving fan-like wheels on top of the cars destroyed atmospheric pressure, or what is generally understood by the term gravitation,..."

In the Smoky God who tells the supposed true story of Olaf Jansen, what could this machine be ? A kind of aerotrain or anti-gravity train ?

Our source tells us that the interior is eternal summertime. Once the thick cloud cover is penetrated, the beautiful, cool, tropical rain forests are revealed. Great waterfalls, high rugged mountains send their cascading product through the mighty rivers to the lakes and the sea below. Fruit is wild and abundant everywhere, except in the small desert area. Vegetables are rarely planted, as they are prolific like the fruit. A paradox is presented. Here we see wandering food gatherers, living in a tropical paradise, who can fly around in Spacecraft!

By exercising caution, there is little danger for the inhabitant of the underworld to encounter. Wars, strife, conflict are events recorded in ancient history. There is only minuscule health problems, as disease is nonexistent. Salves and ointments are made from herbs. Over exposure due to the constant sunshine is virtually eliminated due to the intense cloud cover except for the desert areas where the clouds are often absent.

The life span for the average individual is difficult to determine. Those native to that habitant make no effort to establish or count time. It is considered to be a futile endeavor. The estimated life span is two to three centuries. Only one race (color) is found. The skin color is of light brown, much like the Polynesian peoples. Their statue is short, much like the Japanese.

The interior is never divided into Nations nor is it a single Nation culture, therefore the concept of Nationalism is never entertained. The people gather in small units, much like Clans or Tribes and are highly nomadic. No person owns land and no group claims territory. Though not the same, their life style is strikingly similar to that of the pre-Columbian Red Man, though Spacecraft are plentiful. Crystal operated sophisticated equipment abounds but great cities do not. There is nothing exploited to make work to keep the economy rolling. There is no economy. There is no formal government. The Law of Free Will prohibits these ones from interfering with the affairs of men, even though both share the same planet.

Dear Searchers.
The Earth,Planets & Moon are not hollow.
BUT there are huge inner caverns, so big that someone in the old times thought the whole globe is hollow.