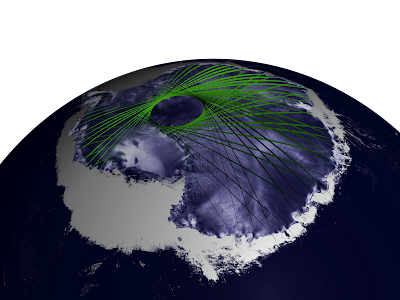 Let there be no more speculation as to the orbit of polar satellites. NASA explains themselves and even shows in multiple video segments how the polar orbit of their ICESAT — Ice, Cloud and Land Elevation Satellite intentionally circumvents the polar regions of the planet.

According to the author of Deep Black: Space Espionage and National Security, William Burrows, the very first polar orbitting satellites that the United States attempted to launch fell out of orbit over the poles. This is because they attempted to launch them directly over the geographic poles and when the satellites entered the region of the polar openings, the satellites were unable to maintain their orbits due to the unanticipated gravity profile of the polar hole and subsequently crashed. The government quickly learned that to achieve a somewhat polar orbit, the path must be slightly off-center from the pole so as not to dip into the area of the openings.

Interesting how perfectly formed the circle is. Yeah, I'd say its some pretty solid proof. Great find!

According to Srimad Bhagavatam written by the sage Vedavyas 5000 years before,Antarctica is the doorway to Jambudwipa and other planetary systems