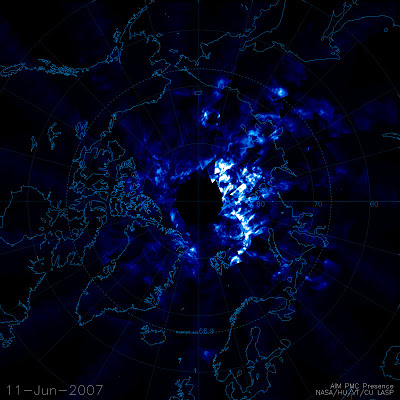 Polar Mesospheric Clouds are referred to as "night-shining" or Noctilucent Clouds when viewed by observers on Earth. The clouds form in an upper layer of the Earth’s atmosphere called the mesosphere during the Northern Hemisphere’s summer season which began in mid-May and extends through the end of August and are being seen by AIM’s (Aeronomy of Ice) instruments more frequently as the season progresses. They are also seen in the high latitudes during the summer months in the Southern Hemisphere.

Very little is known about how these clouds form over the poles, why they are being seen more frequently and at lower latitudes than ever before, or why they have been growing brighter. Here again, a revised understanding of the earth will go a long way to explain how the emissions escaping through the polar openings and impinging upon mesospheric ice particles effectively create a reflective screen or theatre effect for the viewers down below on the earth.

We can see what it looks like rays of light that diffuse themselves on all sides of the first image (11-jun-2007). It is as if a light source emanated through the pole. Hollow earth is a very disturbing theory indeed.

And to think I've spent years of my life studying NLC, only to find the answer in the 'Hollow Earth' theory.