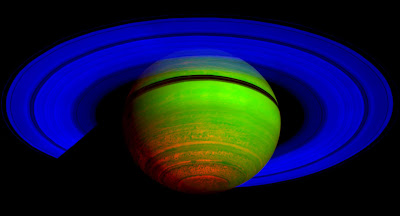 The dark spots and banded features in the image are clouds and small storms that outline the deeper weather systems and circulation patterns of the planet. They are illuminated from underneath by Saturn's thermal emission, and thus appear in silhouette. You will notice the south pole of Saturn is nearly entirely red which indicates that any heat shown on the poles is strictly thermal emission from the planet itself, not reflections from the Sun.

Now, put what we have just learned in context of this infrared image of Saturn which shows a bright hotspot at the extreme south pole. We just found out that any polar heat is generated by the planet itself and is not a reflection of solar emisions. This is just one of the myriad of reasons why we can be sure that the polar hotspot is generated by the internal dynamo of Saturn's inner electric sun and is in no way connected with the solar ion wind from the center of our solar system. 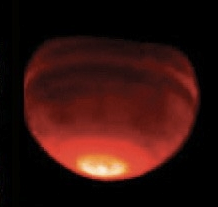