The Hollow Earth: Why is there a Hole at the Pole?

Why is there a Hole at the Pole? 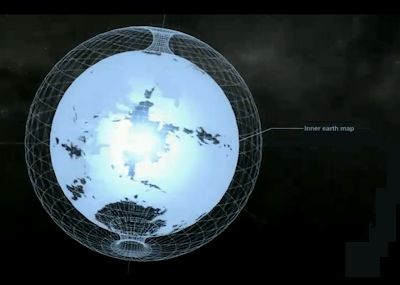 People often ask "Why must the Earth be hollow and why must there be a hole at each pole?"   This is a fair question, one which we can answer easily enough ... yes, using science. To begin, let's ask ourselves — "What do we observe with most spinning systems in nature ... hurricanes, tornadoes, whirlpools or water vortices, etc.?" Well, one common feature they all share is that they are have an inner empty space near the center of rotation. Take this computer simulation of the new star system of HL Tau and the forming protoplanet HL Tau B. Notice anything? That's right, there is an empty space near the center or at the axis of rotation. 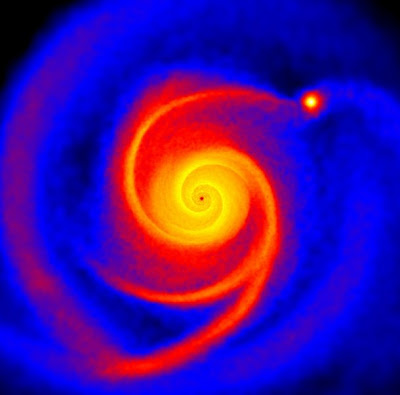 Why is this? I mean, why doesn't matter want to stick near the center of the axis of rotation? Have you ever sat in the middle of a merry-go-round and tried to stay in the center while someone spins it faster and faster? No? Well, watch this video and you'll wonder no more. It's next to impossible to stay near the center. The same holds true for a spinning system of matter which is coalescing to form a new planet — the matter at the center will fly out outward due to centrifugal acceleration.

But that's not the only force acting upon the spinning system — gravity is also acting to pull the matter back together. Let's use another example. What happens when you hold a weight on a string and spin your body around? The weight will fly out a certain distance until it reaches a point of equilibrium where gravity and the centrifugal force counteract and balance each other until the net force is zero. Now spin faster. The weight will fly out even further until it stops at a new equilibrium point. This is perfectly illustrated by the planets Jupiter and Saturn. How many hours does it take Jupiter and Saturn each to complete one rotational period? If your answer was more than 24 hours, you'd be wrong — Saturn has a day of 10.5 hours and Jupiter's day is even shorter at 9.8 hours. Most people assume that Jupiter and Saturn are bigger because they are more massive. I posit that they are bigger because the matter that coalesced to form them had a faster rate of rotation and so their radius was necessarily greater than their slower spinning counterparts — just like the spinning weight on the string example. 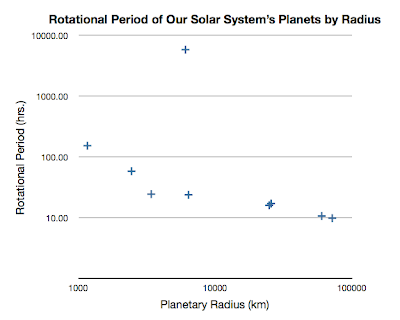 Now we've shown, using simple physics and logic, that spinning systems are hollow and the radius of planets are determined by their rate of rotation during formation so that the centrifugal acceleration and gravitational attraction balance out. At this point of equilibrium the heaviest elements coalesce and the lighter elements (such as atmosphere and water) form on either side of this center point, creating an atmosphere and oceans on the inner and outer surfaces of the planet. As you near the poles, the crust thins until eventually you have an opening or a hole at both northern and southern extremities. The resulting configuration is a hollow planet with a shell or crust that can sustain life on the inner and outer surfaces.

Well-reasoned and well-written. Pieces like this will convince more people of the Hollow Earth theory than any amount of New Age feel-good stories. Nice job.

Well, I wouldn't want the capitalists of the outer-Earth to know about this. They would seek to organize an invasion to monetize the resources contained in the inner-Earth!

lets all fly up there and see it for ourselves. We might have to dodge military planes though, cuz they no likey us be there. Wonder why?

I am a physics graduate student who was actually just considering if planets with very short rotational periods could in fact be hollow I did a quick google search and found this blog post. It goes without saying I have a lot of, lets just call it doubt, about your hollow Earth idea but instead of bringing those concerns up I'd rather ask a few questions which even when taken on face value were not completely explained. First, why are both sides of the hollow planet inhabitable? Would not the inner side of the planet be incredibly cold. Second the inner part, hollow part, of the planet may of had an effective gravity due to a very fast rotation rate in Earth's early history but in the current epoch with Earths period of rotation being so small ~24 hr the effective gravity the person on the inside of the sphere would be incredibly small! I just calculated it really quick and in fact it would only be 2.5*10^-8 g in other words micro-gravity everything living on the inside of the sphere would be floating around as if in space. This was posted quite some time ago so I'll be interested if anyone responds.

It's very important to remember that the 'hollow earth' theory, as it is, is first and foremost an alternative theory of gravity. If gravity functions the way our scientists currently believe it does, then the earth is definitely not hollow! ... If however, science is wrong about the fundamentals of the perceived attraction of matter to matter, then the earth can be hollow. Also, the implications must remind us that Jupiter and Saturn are also NOT gas giants. The implications are obviously staggering.

This theory can also explain why scientists cannot account for most of the matter in the universe, leading to a band-aid theory of dark energy and dark matter. The so-called 'dark energy' is really what is causing the simultaneous repulsion and attraction that is leading to matter coming together and at the same time is causing the universe to fly apart.

The fact of the matter is that the theory of gravity has yet to have any serious break-through advances within the last 100 years. This could possibly be due to the fact that what we think we know is wrong, and that science is barking up the wrong tree. If you can find within yourself enough scientific integrity and humility to climb down out of that tree long enough to consider other possibilities, then we may actually find ourselves understanding the true mechanisms that underlie the operation of this wacky, wild universe.

Hello guys, this thesis is becoming more and more popular, Arnauld Pontier a french author has published "Agharta le temps des Selkies" (Asgard edition) and reveals all those points,it's amazing
Hereafter his fan page on facebook for those who would be interested in following discussions on it... Very interesting: www.facebook.com/arnauldpontierofficiel

You say saturn and jupiter are not gas planets? I can't find anything on that on google, where did you find that out at?

Hi. My understanding is there could be a cold fusion heat source floating around within the space, creating the heat we believe is there and would be required for life. Wouldn't gravity be created through the spin?

That is a door way to another civilization maybe the lost Atlantis but the government is keeping us away from there because it's a lost city it has a sun, rivers people aliens or what ever they might be

Dear all.
Look.
This concept is only a theory.
No proof for anything.
So please people, learn some basic physic before buying every idea you see on the net.
The so called scientific explenations presented here are...simply wrong.

Also, dont u think a broken planet should be seen somewhere?

Well from a biblical standpoint hell is inside the earth as it would also fit the biblical term botomless pit..being pulled or floating from one end to the other never reaching a ground or stopping point..bible always right..put your full trust in Jesus to save you from your sin punishment of hell believe he died and rose again for you..bible says you will never loose it once you ask him to save you