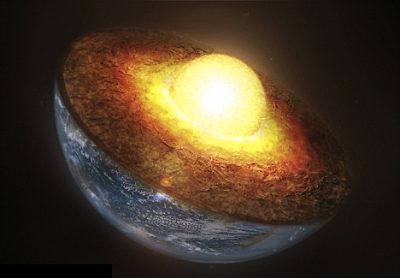 Scientists freely admit that 'We know more about distant galaxies than we do about the interior of our own planet.' Of particular interest is the region between the outer mantle and the inner solid core which exists in a hard-to-define 'liquid' state. This liquid 'outer core' is apparently well mixed and perplexingly not stratified or layered in any discernable fashion.

As judged by the change in velocity of P and S seismic waves propagating through the layers of the earth, there is a conspicuous boundary between the outer mantle and the inner core where matter exists in a non-solid state. Because of our assumptions about the pressures present in the interior of the earth, scientists are quick to assert that this is obviously a highly compressed and super-heated amalgamation of liquid materials. If Newtonian mechanics and other observations hold true, this discontinuity could actually represent a physical gap where atmospheric or other gases are present — or in other words ... a hollow. What we could actually be observing when trying to interpret the rates of travel of seismic waves is the earth's outer crust or mantle separated by an actual physical hollow from the inner core or luminescent sun suspended at the center of the earth's gravitational mass. 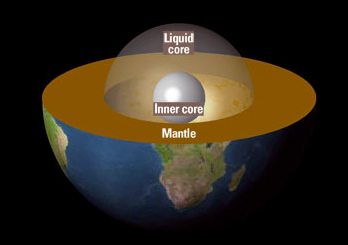 To make matters even more complicated, the inner core is rotating at a faster rate than the planet as a whole, making the case for a physically detached or suspended inner sun even more plausible.

More on the Earth's core from Antimatter Radio with Jeffery Grupp

The Central Sun is a Hydrogen Sun which "hangs" in the center of our World. This Sun is approximately 600 miles in diameter and it functions steadily. The Central Sun is the Logos. This is the Mind/Spirit of the Mind/Body/Spirit complex which is the totality of our Earth Mother. The Central Sun/Logos is designed to burn for a very long time.

The openings at the North and South Poles are located at the most inaccessible regions of the planet. Even from the vantage point of an aircraft, you would need to fly almost directly over the opening and looking down at the right time or you could easily miss it. The sloping walls of the high valley camouflage the scene and present a form of optical illusion.

The molten and semi-molten Mantle is the source of gravity that holds mobile items to the surface in the interior as well as on the exterior of this thick crust. Since the mantle is 400 miles from any surface, even around the curve at the two openings, you could traverse from the surface, making the 1200 mile grip to the interior surface without realizing any difference whatsoever in the gravitational pull under your feet.

Approximately three quarters of the way around you would be able to see and to feel a great difference. The interior is a tropical rain forest, especially at the Polar regions where the openings are. Rain clouds are common, thus blocking the outside view even further. Great fresh water rivers flow out from the interior to blend with the salty Arctic and Antarctic Oceans. A huge volume of fresh, tropical, river water is emitted at the South Pole. This accounts for the great icebergs created in those regions.

The flora at both Poles is similar. The fauna at the North Pole is often integrated with surface fauna. Fishes frequently migrate from surface waters to interior waters, thus accounting for disappearances or sometimes appearances of species of fish in large quantities. The absence of land mass at the South Pole prohibits the exchange of animals.

There are small arid areas around the equatorial belt in the interior. These are the regions where the constant sun light is seldom diffused by cloud cover. Here the shadows are harsh and cold. The shaded areas never seeing the light of the Sun. The constant sunlight causes plants to grow to enormous sizes. There are no carnivores amongst the animal kingdom. There is one large ocean located under the area of Africa and Europe. There are many sizable lakes and innumerable rivers and streams. The Plant and Animal Kingdom thrive in this lush environment.

The surface is gently rolling to rugged mountains. There is very little flat land. An aerial view reveals rolling greenery as far as the eye can see. The temperature is constant in the mid 70's. The lofty peaks are a bit cooler, while the desert areas hold steady at near 100 degrees. The mountain ranges are spectacular in their beauty. Their noble peaks protrude through the cover.

There is no night time. One newly arrived would miss the Stars and Moon. The Eskimo who knows six months of darkness and six months of daylight could adapt the quickest. Considering the close proximity of the Eskimo's home to the North entrance, who can say the trip has not been made many times in the past?

Not only can fact be stranger than fiction, but science can be fooled by Highly Evolved Entities!