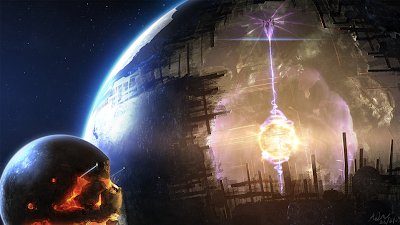 Modern physics sheepishly concedes that 83% of the matter of the visible universe appears to be missing. What you say? Well, scientists assume that celestial bodies are solid and composed of a certain portion of matter according to our accepted notions of gravity. They observe the interractions of these bodies and attribute a certain interrelationship of matter to gravity based upon these assumptions and observations. Fast forward this interrelationship to the known universe where they witness lensing effects and other weighty gravitational interactions. The problem arises, however, as they are unable to pin this observable gravitational interaction to the appropriate amount of visible matter based upon the aforestated assumptions about gravitation (which, correspondingly depends upon the glaring assumption that celestial bodies are solid and composed of a certain amount of matter — Sounds like a house of cards to me!)

Physicist (Dave Goldberg) posted an article on io9 stating that all this could potentially be cleared up if we accept the notion that some extraterrestrial civilization had built Dyson spheres around all these massive objects (or at least 83% of the known universe), thus obscuring their starlight and making it impossible for us to observe them directly. Well, I'm not buying that, but what if you take the corollary argument and say that all celestial bodies are already naturally occuring Dyson spheres (a fancy way of saying 'hollow'), and hence the gravitational effects we witness are actually attributable to far less matter to begin with (83% to be exact)! ... Then the scientific types can finally balance out their equations and go home happy. Everybody wins.

I'm afraid you misunderstood my article. The question posed to me was whether Dyson Spheres could account for Dark Matter, and the answer was an unequivocal "no." I refer to microlensing, infrared radiation, and evidence from Big Bang Nucleosynthesis models, all of which makes the original question quite impossible.

I try to keep my column focused on the consensus view within the Physics community, and while the questions may be sensationalistic, I try to keep the answers as reality-based as possible.

Hahahaha I'm so glad Dave Goldberg actually commented on this, this is great!