The Hollow Earth: Third Reich Maps of the Inner Earth 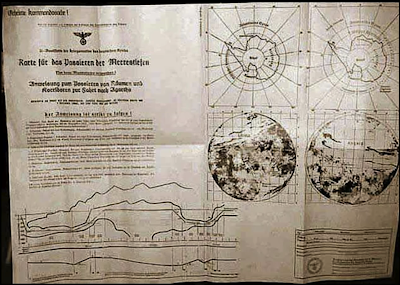 We've all heard tales of Nazis exploring the southern extremities of the globe and even setting up bases in Neuschwabenland. Some have also heard of Operation Highjump and Admiral Byrd's altercation with entranched German forces that overpowered them with amazing flying craft. A video has recently surfaced which shows a 1944 map from the Third Reich detailing not only the direct passageway used by German U-boats to access this subterranean domain, but also a complete map of both hemispheres of the inner realm of Agharta! (Translation here) 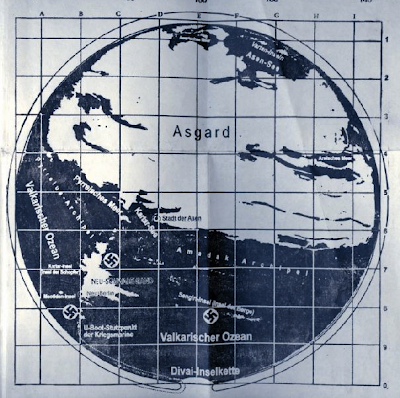 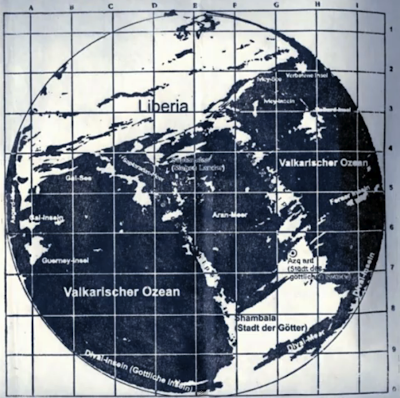 More detail: 1 2 3 4 5 6 7 8
Rodney Cluff on his website has a copy of a letter (with translation) supposedly sent from a Karl Unger that was aboard the U-boat 209 (commanded by Heinrich Brodda) saying that they had reached the inner earth and would not be coming back!

If that seems too unbelievable, compare with those maps, this map done by the famed Tyrolean cartographer and artist Heinrich C. Berann for the National Geographic Society beginning in 1966. It clearly shows the continent of Antarctica without its cover of ice. The intriguing detail here is that there are underwater passageways that run nearly the entire length of the continent and seem to converge at the exact location identified as the opening into the hollow earth! 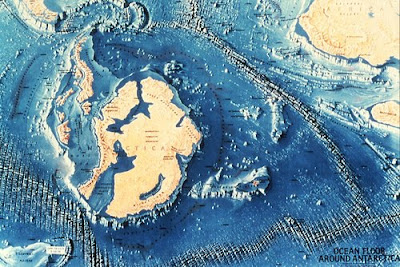 How, exactly, does one post a letter from the hollow earth?

Hmmm. Are there any post offices inside the Earth? In my recently published novel Deception Island, which is set in Antarctica, there is a alien race of humanoids who use telepathy to communicate.

There were communications on the uboats. not physical letters with stamps

How soon will the Agarthans from inner-earth surface to come and meet us again?

all i know is that the postcard/letter was handed to the two u-boats which went back to argentina, both vessels were captured by the allies, while they were tied up at the docks of a harbor. i saw the letter a couple of times and i must admit it looks legit. i'm german and i can read every word of it, after spending some time studing the letter i could only admit that it makes sense,plus the handwriting suits a young, not very educated german man/boy from that time. and the whole context in the letter with the story we can research does make sense.after i finished with the letter, i'm very much convinced that there is something out there!

The wrong usage of long s is suspicious (see: http://en.wikipedia.org/wiki/Long_s), and "printed in KZ Dachau", come on!

To anonymous asking how letter was sent: One gives the letter to someone returning to the surface. Some men undoubtedly had families they did not want to abandon despite the discovery.
To anonymous questioning the spelling in the word dass, I'm German I grew up with sharp-s but adopted the use of ss at some point as many of us do. Also the letter is not in Suetterling handwriting which adds to the authenticity in my eyes. Wheres the printed in kz Dachau... the abbreviation kz is from them fantasy of those floating the ausschwitz lie, we never referred to any detention facility as a kz. they were referred to as kl.

Just been looking at satellite photos of the hollow earth location as specified in this youtube video http://www.youtube.com/watch?v=4G7v8UUm-qA...I can almost make out the faint outline of a reverse swastika. Maybe there is four underground rivers/tunnels in this location as opposed to 2 tunnels/rivers in the nazi maps

To me the letter looks genuine. It is only unusual in the sense that is does not use the script that was commonly used during those days in Germany. But we do not know to whom the letter was sent. If the person was not German he would not have been able to read it if it was written in the German script.

I just published a book about tne hollow earth some months ago. It is a diary of 7 travelers. They went to the north pole and found a way to go to the inner cities. The real and hidden history of mankind is revealed to them.http://www.bubok.co/libros/213478/Lo-mas-intimo-de-la-tierra

Is there anything new on this what so ever ? ANything really credible or anything that definitively disproved this?

totally 7earths with the one we are on all.like ours and skys inside except the last one there isnt any thing under it.......the globe is huge.