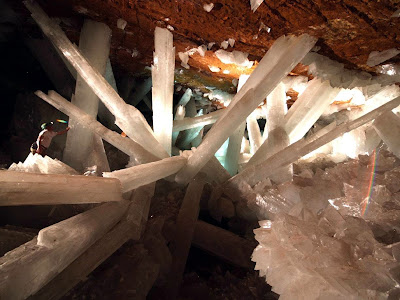 Should anyone think that the story of forests of hundred foot tall mushrooms is too remarkable to be believable, just take a look at the Cave of Crystals found in the Naica Mine of Chihuahua, Mexico. It's a veritable crystal cathedral of selenite or gypsum crystals. Over a thousand feet below the surface of the earth, where the proper temperatures, moisture content and minerals were able to remain stable for tens of thousands of years, these crystals grew to gigantic proportions. Some of the crystals are over 4 feet in diameter, 50 feet long and weigh well in excess of 50 tons!

Remember that the deepest hole ever drilled into the crust of the earth is 12km (7.5 miles). Even though continental crust extends to over 30 miles deep, the earth's crust occupies less than 1% of the earth's total volume. Imagine the wonders waiting to be discovered just below our feet! ... Indeed, it was appropriately stated that we know far less about the inside of our planet than we do of distant galaxies and solar systems. 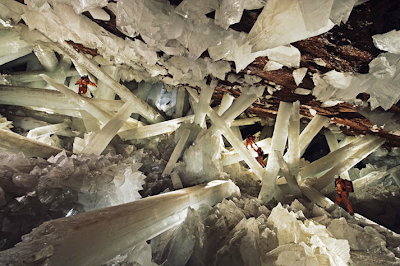 Nat Geo said the crystals grew as they were immersed in Water which was drained due to nearby mining. Beautiful.