The Hollow Earth: The Decision of the Ancient Ones

The Decision of the Ancient Ones 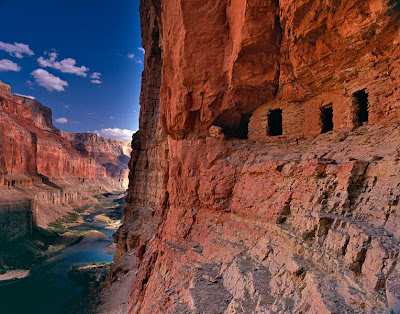 "Long, long ago, for many years life in the Southwest was normal. Rain and snow were abundant. Then came the sudden Earth movement, the cracking noise and flashes of light. From this the air and the wind became very bad. The seasons seemed to stall. Drought was everywhere and the villagers were in trouble. The game animals were disappearing and there was sickness in the villages. There was no rain and the sun was getting hotter. Then one day, the Ancient Ones were visited by the Sky People. They told the Ancient Ones to go underground. The Visitors talked about the place below and how they communicate with the Ones below. The way to get to the place below would be in southern Colorado and was a "place of warm air".

During that time, Mesa Verde had four different clans. Word was passed among the villagers about the message from the Sky People. The clans agreed to go below and most of the villagers went under. A few stayed behind and met their fate on land. Later the wind wiped out all the people on the surface so that there was no trace left of them.

The story goes that after many years, some people started returning to the surface. These people spoke of the white star and how different races lived down below. These people had also changed, becoming much taller and stronger. They emerged from where the river once flowed. That place was in New Mexico near Chaco Canyon. They noticed that the wind and rain traveled on different courses now. The climate had also changed drastically. The stars were different and new animals had arrived.

Later on, throughout the years, some pueblos used the cave passage between Mesa Verde and Chaco Canyon to travel. When tribes were fighting the passage was used as a path of escape. It was also later used for trading among tribes in various locations."

This story was passed on from Navajo "Naaltsos Iieehnii" (the Paper Maker), Torreon, New Mexico.

This story would explain the Anasazi disappearance quite effectively would it not.

Here's a story from the Arizona Republican newspaper, in 1909, about a discovery of huge cave dwellings in the Grand Canyon.