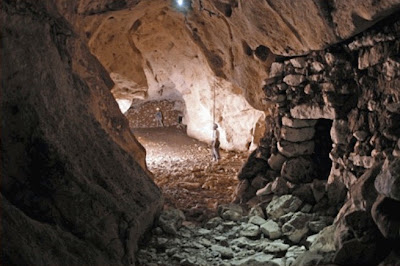 Mexican archaeologists announced the discovery of a veritable maze of underground rooms, tunnels and caves, some submerged in water, containing human remains and traces of a long occupation. Eleven cavernous Mayan temples and ruins have been identified so far in the huge underground complex at the site in the Yucatan peninsula. Scientists are convinced that their discovery is nothing other than the portal to Xibalba, the mythical Mayan underworld.

According to ancient Mayan writings of the Popol Vuh, the road to the underworld of Xibalba was strewn with many obstacles such as rivers filled with scorpions and snakes and abandoned houses occupied by bats, vampires and mythological animals that could kill those who would have ventured on such a journey underground. The Mayans believed that the souls of the dead pass through this passage accompanied by a dog (Anubis?) whose vision could pierce the darkness. "Offerings left here confirm their conviction that this was the passage to the afterlife," said Guillermo de Anda, one of the leading archaeologists exploring this site.

NOT Anubis BUT KERBERUS