The Hollow Earth: The Cryosphere Today 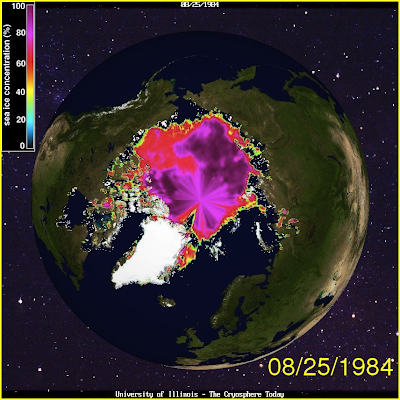 The cryosphere is the term used to collectively describe the portions of the earth's surface where water is in its solid form. The University of Illinois has a fantastic resource available for viewing the polar sea ice called Cryosphere Today. From here you can watch animations of the ever changing sea ice from a database of images collected as far back as 1979. Much of the more recent data has been collected by the AMSR-E (Advanced Microwave Scanning Radiometer - EOS) aboard NASA's Earth Observing System (EOS) Aqua Satellite.

It's interesting to note how the earlier images (1979 - 1987) have a large swath of the polar region that was apparently unmonitored as the data was seemingly extrapolated and stretched to the pole, hence the radial patterns seen in the image above. From 1987 forward, the images progressively cover more and more of the pole. The noteworthy features, when comparing images from various dates, are the radial patterns that the ice forms coming from a central point at the pole: