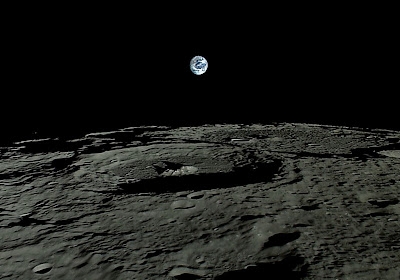 Scientists believed that all their questions would be answered when they brought back lunar samples and moon rocks from the Apollo missions. Not only did these samples not answer their questions, they opened a literal Pandora's box of questions they hadn't yet even conceived of regarding the origins of the moon. The results of the exploration were so bizarre that two prominent Soviet scientists wrote a paper indicating that the only way to reconcile all the discrepancies regarding information about the moon, was to conclude that the moon was a hollowed out planetoid or artificial satellite that was formed beyond the solar system and towed into orbit around the earth.

Consider the following scenario about how an extraterrestrial race takes over an inhabited planet such as Earth:

1) Hollow out a large asteroid or moon or (if you are technologically advanced) build an artificial moon.
2) Move the moon into orbit around a planet with a civilization that is to be controlled.
3) The recent addition of new gravity and tidal forces will wreak havoc on the planet's ecosystem and weather patterns, the results of which will effectively reset civilization back to a more primitive condition.
4) Make your presence known and reboot civilization under your authority.
5) The recently added moon becomes the ideal location for a staging base / observation platform from which to ensure that your new authority and control regime are adequately enforced. The unsuspecting and less technologically advanced species on the target planet will have no idea what hit them and will have no way to oppose the recent 'invasion' with all their technology having been wiped out from the artificially induced cataclysms.

This scenario supposedly took place on earth. The ancient Greeks talk about the days before the moon appeared in the skies. There are many verbal histories from tribes and indigenous peoples all over the earth that discuss the days before the moon came to be. The Proselenes were a group of people whose name actually means "before the moon" as they claimed to be in existence before the moon's appearance in the heavens. Also, our scientists are left holding an empty bag when trying to explain how our moon, as large as it is compared with the earth, ever came into being. It's existence seems to defy all the 'laws of physics'.

There is ample evidence that there were some very advanced races on earth around 10,000 years ago. But then, there were global cataclysms that effectively rebooted civilization. Now, if you follow David Icke at all, you have heard about the draconian race of reptilians that are involved with the power structures of our planetary regimes on almost every level. This makes you wonder if the moon is not some staging base for a planetary level of mind control, reality alteration and genetic manipulation. Are we a slave race ... and to whom?

Thanks for your interesting site and the opportunity to comment.
Rather like the original moon rocks, our science discoveries just seen to confound more. The moon has a single parent science now says. So this means that the moon is from earth or both arrived together. Outlandish idea: the earth was originally the size of Venus and the extra material is now 'shelling' the moon. This shell would make the moon the same chemically as Earth.
I agree that there is so much distortion that there can not be a ready answer. Perhaps a 5,000 y reoccurring compression that heats cores. Further the compression collapses and compresses the heliosphere to the sun. Only lately has this energy field lost power and now --conveniently for us--- compressed only to mars of jupiter. If this energy field was led by Majorana transforms the body would first experience increasing compression, then the transforms, then the back side of the energy and expansion through heat release and cosmic rays.
I have a site at wordpress/katesisco
About being hollow. I wonder if that can be so. We have no way of knowing for sure if it is material all the way down. Maybe the earthquake waves to deflect. This heat then must come from somewhere and if not the core then from this compression. But the compression no longer imparts as much heating so should we see less heating?

If our Earth was hollow what would provide the heat for magma,domes, etc? Doesn't that imply some external form of energy that heats? Like compression of the heliosphere? NASA says so but predicts a lengthwise compression to produce a gravity wave.
I agree the evidence is so mixed up as to be impossible to decipher. I am enthused about sonochemistry (wiki) in which something like cavatation occurs. Vast amounts of safe energy are produced.

IT is a artifial sattelite,being put over there for the matters of Branton files investigations,essays ,The cassiopaeans transcripts,and more importantly the studies of MT ,Michael topper " the thunderbird chronicles and then You'l see!!!!
< < the lonely observer,walke > >

If the earth was hollow ... which is rather likely but not at this time clearly provable, the heat inside that expresses itself as magma and in general volcanic activity, must have a different source than the generally accepted "liquid core" hypothesis posits.

If hollow, there probably is a central point (sometimes called a central sun) that provides light to the inside of the "shell", but that central sun would not be near sufficient to explain volcanic activity at the outside surface.

One theory, which makes sense for me, is that heat is generated in rock masses at the hydrogen/oxygen interface.

You might say how does hydrogen get into the rocks to begin with. Hydrogen is the most abundant element in the universe, and any planet/star attracts hydrogen by reason of its rotational vortex. The most likely is that hydrogen comes in as protons and only forms into actual hydrogen inside the rock. So there is (or rather there may be) heavy diffusion of deep rock strata with hydrogen.

Hydrogen and oxygen react violently, where they meet each other.

Since the air and some of the interstices in close-to-the-surface rock is filled with a good part of oxygen, where the two gases meet, rocks melt and magma forms. The rock literally gets boiled by the hydrogen/oxygen furnace, and at times gets violently ejected.

That's where volcanic heat more likely comes from, not the hypothetical molten core...

Some material I have read indicates the moon is a soul recyling station.