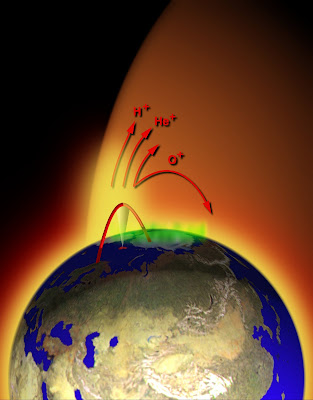 NASA scientists have discovered relatively recently and quite by accident that the earth's magnetosphere is filled with ions, previously thought to come from a continuously blowing solar wind, but now seen to have their source in "polar fountains" of energized particles coming from a very localized region of the north and south poles of planet earth. This coincides exactly with what is seen in the IMAGE satellite video of the aurora australis that apears to be "blowing" from a centralized location or dark spot centered near the south pole.

Scientists have long been baffled by the mechanism by which solar particles which are at a relatively low energy level become highly energized to form what we see as the aurora borealis and aurora australis. This enigma has defied scientific minds for many years. Now, purely by chance, it has been shown that the solar particles are not necessarily responsible for these amazing light displays, but the north and south polar fountains shoot highly energized particles/ions high into the magnetosphere to create these dazzling energetic effects we've come to call the norhtern and southern lights.

Hollow earth enthusiasts are quick to point out that this merges precisely with the idea that there are polar openings to the interior of the earth through which these ions are accelerated from inside the planet where an internal sun hangs suspended at the exact center where the earth's core is conventionally believed to be. The areas of ozone depletion can also be shown to coincide with these energetic jets of ionized particles that blast away the thin layer of ozone near the poles in a seasonal, almost clockwork like fashion.

Yes, it is. Another interesting twist on the Hollow Earth theory. Making it more difficult for me to be a skeptic :)