The Hollow Earth: Freemasonry & the Point within a Circle

Freemasonry & the Point within a Circle 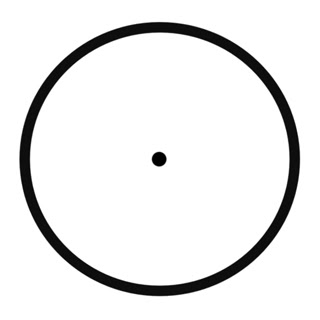 In freemasonry symbolism has a rich heritage. As with any secret fraternity or occult brotherhood, symbolism is heavily allegorical with various and layered interpretations. The central freemasonic symbol of the point-within-a-circle is no exception. While some may see a constructive and benign interpretation of the symbol, others perceive a more sinister one. Take for instance the Freemasonic Washington Monument. The memorial obelisk is seen as the phallus of Osiris or the male regenerative principle (lingam) surrounded with the circle of flags, or the feminine womb (yoni). This symbolism is repeated yet again in St. Peter's Square at the Vatican. While this is certainly an accurate representation of the symbolism employed by the point-within-a-circle, I would like to offer another interpretation.

William Morgan is infamous for his exposition of freemasonry in his work 'Free Masonry Exposed and Explained'. After the publishing of his provocative work, a maelstrom ensued which ultimately resulted in Morgan's abduction and disappearance. A body was found which was claimed to be Morgan's, but his story closely parallels that of the main character in the work 'Etidorhpa'. In Etidorhpa, a character similar to that of William Morgan conceives of a publication to expose the fraternal workings of a secret order but is then kidnapped and banished to a subterranean realm, the existence of which is a closely guarded secret of this secret society. Etidorhpa chronicles the character's abduction and subsequent journey through the crust of the earth to its hollow interior.

I propose that the realm of the hollow earth is one of the central mysteries concealed by the occult secret societies and is represented by the pictogram of the point-within-a-circle or the ancient sun symbol (the central point represents the inner sun within the surrounding crust of the earth). In this way, the occult orders behind the power plays of world history veil the true meaning of science and reality beneath cryptic interpretations of symbols that 'hide in plain sight'.

I enjoyed your article linking the 'point within a circle' to hollow world theory. As a Scottish Rite Freemason, I have many ideas about hidden information and lost information. The quest is to find that which is lost, and to reveal that which is hidden

As a scottish rite freemason interested in the topic, I am enjoying the information. our quest is to discover that which is lost, and reveal that which is hidden. Good luck on your quest.

Isn't that the alchemichal symbol for gold.

Like precious jewels found in sand, the ancients left precious turths in mysteries of the past. Homonids have walked this planet far longer than our scientist dare admit. Since the Earth was habitable, nearly 3 billion years have past. During tbat immense span of time, many civilizations have come and gone - some to other planets, some to regions far below the surface. All have left proof of their presence in out of place artifacts that still exist today, yet most are hidden away dusty museum and university basements.others are simply ignored because acknowledging them would upset accepted paradigms that glory the present as the final evolution of humanity. However, humans are only a bridge, not an end