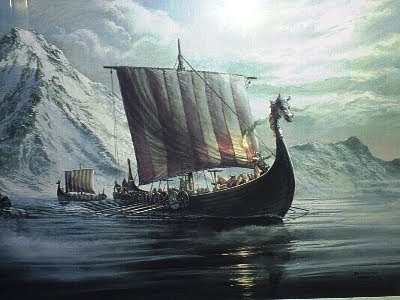 In 985 A.D the Viking explorer Eric the Red discovered Greenland. By 1410 A.D. there was anywhere from 10,000 to 100,000 Viking colonists on Greenland's shores. That was the last date, however, that any one of the Viking settlers of Greenland was ever seen again! All of their villages were found abandoned and their disappearance has become one of the largest unsolved mysteries in our recent history, that is, unless you ask the native people of Greenland — the Inuits.

Who better to ask about the nature of the poles, than those who have spent centuries hunting, exploring and living in the regions that were only known about in fables. According to Eskimo tradition, the White Men swarmed suddenly northwards to a wonderland the natives had long known about — a land of endless summer, rich in vegetation and game. It is easy to picture a full colony of struggling Viking colonists lured to a land of eternal bliss inside the protective 'womb' of the earth as described in vivid detail by the traditions and folklore of the indigenous natives of the polar regions.

Quite fascinating. This re-awakens my little boy's imagination. Anything is possible. What's real, what's not real? Who cares? In the exploration is where all the fun is to be found.

The ZR1 never made it. Sounds like sabbotage to me. http://en.wikipedia.org/wiki/USS_Shenandoah_(ZR-1)