"Concerning Agharta, Professor Henrique J. de Souza, President of the Brazilian Theosophical Society and a leading authority on the Subterranean World, in his magazine, published an article he wrote, 'Does Shangri-la Exist?' from which we quote:

'Among all races of mankind, back to the dawn of time, there existed a tradition concerning the existence of a Sacred Land or Terrestrial Paradise, where the highest ideals of humanity were living realities. This concept is found in the most ancient writings and traditions of the peoples of Europe, Asia Minor, China, India, Egypt and the Americas. This Sacred Land, it is said, can be known only to persons who are worthy, pure and innocent, for which reason it constitutes the central theme of the dreams of childhood.

'The road that leads to this Blessed Land, this Invisible World, this Esoteric and Occult Domain, constitutes the central quest and master key of all mystery teachings and systems of initiation in the past, present and future. This magic key is the 'Open Sesame' that unlocks the door to a new and marvelous world. The old Rosicrucians designated it by the French word VITRIOL, which is a combination of the first letters of the sentence: `VISTA INTERIORA TERRAE RECTIFICANDO INYENES OMNIA LAPIDEM,' to indicate that 'in the interior of the earth is hidden the true MYSTERY ' The path that leads to this Hidden World is the Way of Initiation.

'In ancient Greece, in the Mysteries of Delphos and Eleusis, this Heavenly Land was referred to as Mount Olympus and the Elysian Fields. Also in the earliest Vedic times, it was called by various names, such as Ratnasanu (peak of the precious stone), Hermadri (mountain of gold) and Mount Meru (home of the gods and Olympus of the Hindus). Symbolically, the peak of this sacred mountain is in the sky, its middle portion on the earth and its base in the Subterranean World.

'The Scandinavian Eddas also mention this celestial city, which was in the subterranean land of Asar of the peoples of Mesopotamia. It was the Land of Amenti of the Sacred Book of the Dead of the ancient Egyptians. It was the city of Seven Petals of Vishnu, and the City of the Seven Kings of Edom or Eden of Judaic tradition. In other words, it was the Terrestrial Paradise.

'In all Asia Minor, not only in the past but also today, there exists a belief in the existence of a City of Mystery full of marvels, which is known as SHAMBALLAH (Shamb-Allah), where is the Temple of the Gods. It is also the Erdamf of the Tibetans and Mongols.

'The Persians call it Alberdi or Aryana, land of their ancestors. The Hebrews called it Canaan and the Mexicans Tula or Tolan, while the Aztecs called it Maya-Pan. The Spanish Conquerors who came to America believed in the existance of such a city and organized many expeditions to find it, calling it E1 Dorado, or City of Gold. They probably learned about it from the aborigines who called it by the name of Manoa or City Whose King Wears Clothing of Gold.

'By the Celts, this holy land was known as 'Land of the Mysteries' - Duat or Dananda. A Chinese tradition speaks of Land of Chivin or the City of a Dozen Serpents. It is the Subterranean World, which lies at the roots of heaven. It is the Land of Calcas, Calcis or Kalki, the famous Colchida for which the Argonauts sought when they set out in search of the Golden Fleece.

'In the Middle Ages, it was referred to as the Isle of Avalon, where the Knights of the Round Table, under the leadership of King Arthur and under the guidance of the Magician Merlin, went in search of the Holy Grail, symbol of obedience, justice and immortality. When King Arthur was seriously wounded in a battle, he requested his companion Belvedere to depart on a boat to the confines of the earth, with the following words: 'Farewell, my friend and companion Belvedere, and to the land where it never rains, where there is no sickness and where nobody dies.' This is the Land of Immortality or Agharta, the Subterranean World.'


"This land is the Walhalla of the Germans, the Monte Salvat of the Knights of the Holy Grail, the Utopia of Thomas More, the City of the Sun of Campanella, the Shangri-la of Tibet and the Agharta of the Buddhist world." 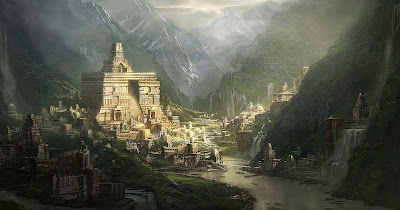