Everyone remembers the infamous comet Shoemaker-Levy 9 aka the 'String of Pearls' that slammed into Jupiter on July 1994. Well, it turns out that just about every astronomical 'eye' or observatory was turned towards Jupiter on that fateful day yielding a plethora of infrared images for us to peruse. The detail which fascinates me in the image above, besides the 'machine gun' impacts of Shoemaker Levy 9, is just how hot the polar region shows up in the infrared photos. If you compare the brightness of the poles to the equatorial region, its temperature is actually closer to that of the sites of impact of the comet! This is indeed quite an eye-opener. 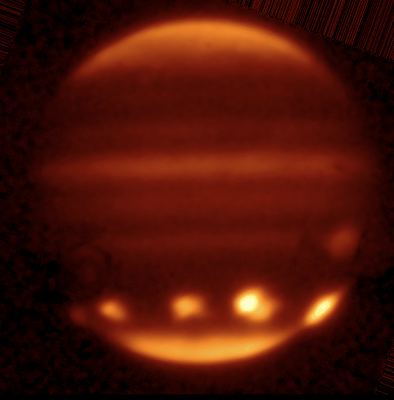 NASA has their own relative temperature gauge for their infrared photos, but I choose to disregard their reports, not out of ignorance, but rather knowing that part of their strategic mission is to deliberately misinform the public so as to hold the more important tidbits of information for the classified and information-sensitive arena. You don't think they would spend billions of the tax-payers' money just to announce their findings for all the would-be power mongers out there to use without putting in their due dilligence now would you? Well, neither do I, and this is just one more example of how you can piece together the evidence and gauge the actual temperature of the poles by comparing it with the near nuclear bomb level of heat which occurs at the comet fragment impact sites.

Scientist struggle explaining how the level of solar radiation at the Earth's poles can cause such brilliant polar auroral displays. It would be next to impossible for them to explain away the level of heat evident at Jupiter's poles without radically redefining their planetary mechanics! Luckily for us hollow earthers, we have an explanation to lend them if they come up short. Just imagine the power of the Jovian inner sun for it to create such spectacular heat at its polar extremities!

i am believing! Keep it up. Will check daily.