The Hollow Earth: The Earth & Moon Ring Like Mighty Bells 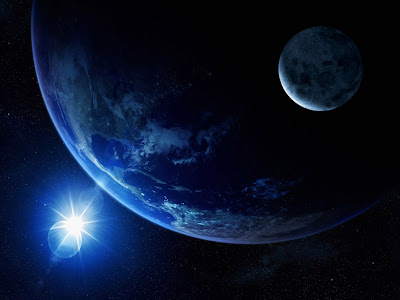 After large earthquakes (magnitude of 8 and greater on the Richter scale) the Earth sets to regular, rhythmic oscillations, not unlike the ringing of a bell after it has been hit with a hammer. The Sumatra earthquake in 2004, for instance, left the earth ringing for several months afterwards.

The moon also freely oscillates when struck with a sufficiently large "hammer". When spent fuel casings from Apollo and other missions were jettisoned and crashed on the surface of the moon, seismometers that had been left there by astronauts recorded and transmitted information indicating that the moon rang for as long as an hour or more.

This is very curious in light of the fact that the earth is apparently filled with a molten inner layer of material. It's well known that molten or liquid material in a solid casing dampens harmonic oscillations. Take a wine glass that will ring when struck. Fill it with water to the brim and then strike it again. The otherwise sonorous note is now nothing but a "plink". So, either the "facts" don't add up or someone is yanking our chain.

Very interesting - but I'm surprised to hear you buying into the moon landing hoax. Nobody's ever been sent into space, let alone gone to the moon and back. Read Dave McGowan's hilarious "wagging the moondoggie" piece for a thorough fisking of that absurd idea.

Water in the wine glass will still resonate and ring, but it is better to imagine the wine glass filled with wet sand. That is closer to what a solid earth with a molten core would be like. It won't ring at all.

The earth is hollow with 2 main entrances at the poles.. Plus multiple caves..