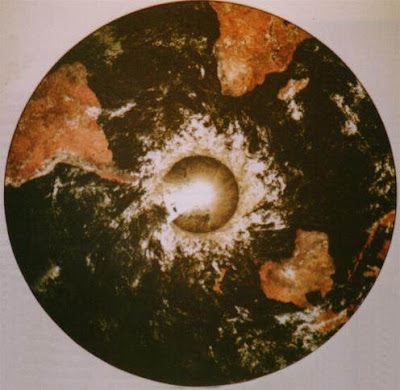 Video game designer, Nick Marks, suggested that there are the larger suns that generally form at the center of solar systems but then you have much smaller suns around which dyson sphere type planetary crusts can form. He also suggested that perhaps there were anomalies such as coronal mass ejections on the surface of these suns which spewed out material that eventually orbited the diminutive stars only to form a protective shell. These shells, much like planetary bodies around the stars' larger counterparts, were rotating but gradually 'smeared' their way up to the poles, leaving only holes at each pole along the axis of rotation. The shell could even form a weak layer over the poles that would, sometime during the planet's evolution, break open and release a catastrophic deluge of material from the inner world, literally flooding out onto the planetary surface (sound familiar?!).

Nick also suggested that the planetary shells might actually serve to prolong the life of the miniature stars by acting as insulators and contain the stars' heat wrapped up cozily on the inside. This would actually go a long way to explain how you could end up with rouge planets forming outside of the typical solar system 'nuclear family'. It would also explain how life could be sustained in an otherwise hostile environment, but we'll leave that for a later post. The further you go with this narrative, the curiouser the universe becomes. For the life of me, I just can't figure out why astronomers and physicists aren't picking up on this idea more. Oh, that's right, their centuries old delusions of gravity get in the way ... pity.

I don't believe that the inner sun is anything like the "outer" sun. It is far too small to sustain energetic emission for billions of years. According to Joseph Cater, in his book, "The Awesome Life Force", it is formed by electrons (soft particles) that come from the outer sun that penetrate the shell and collect in the center. The electrons collect in the center due to their being repelled by gravity. When the sun's output increases, as it does in peaks of the 11-year sunspot cycle, the electrons also increase, and excess electrons escape via the polar openings, causing Aurora displays.

inner sun is composed of hot ionized gas and electromagnetic anomalies. it radiates in orange/red light and is positively charged and magneto-dielectric in nature.

the earths shell is not 800 miles but at least 2500 miles 3000 miles max. with this hollow earth fits with the standard seismology data.