The Hollow Earth: The Rays of Shamash

The Rays of Shamash 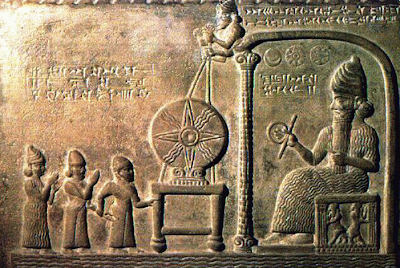 The Assyro-Babylonian sun god, Shamash (or Utu in ancient Summeria), was often depicted by a 4-pointed star-like symbol with wavy lines emanating from between four protruding lobes. 'Floating' in the free space of the middle of the symbol is a heavy dot or circle separate from the rest of the icon. All this was typically circumscribed by a thick outer circle. Although there is evidently no lack of interpretations for this icon, I would like to offer one of my own.

The symbol of Shamash bears a remarkable resemblance to the map created by Mercator in the 16th century where the north polar region is drawn to have four large land masses that are in turn separated by four prominent rivers. It would make sense that all this is situated inside a circle or sphere if the central dot depicts the inner sun suspended in the cavity of the earth while the wavy lines represent the famed four rivers that flow out from the center of this realm.

Perhaps we don't give the ancient ones enough credit in depicting the source of life and the seat of earthly civilization. After all, wouldn't it make more sense to revere the inner realms, if even iconographically, as the geographic location for the evolution of sentient life on earth?