The Hollow Earth: The Vatican — A Bird's Eye Perspective

The Vatican — A Bird's Eye Perspective 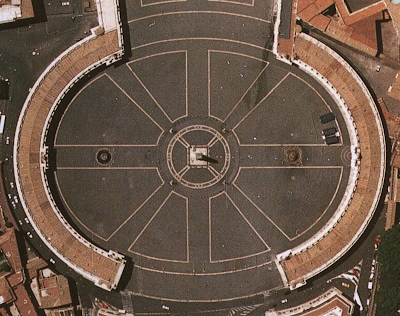 Then you have the largest solar cross of them all ... at the Vatican — St. Peter's Square next to the Basilica, Rome. Before we dive into a discussion of St. Peter's Square, let's first acknowledge that the Vatican is in possession of one of the oldest libraries in the world with some of the most significant historical texts — over 75,000 manuscripts and 1.1 million printed books. This does not even account for the Vatican secret archives of 35,000 volumes that are not open to public perusal. This being said, it is obvious that the collected information the Vatican has access to is large and extremely comprehensive. It's also safe to say that the Vatican does not take its symbols lightly, as everything is deliberately and deeply symbolic. (If you don't believe me, read up a little bit about their 'pet' telescope on Mt. Graham, Arizona, lovingly titled "Lucifer" — one of the largest binocular telescopes in the world and the most powerful of its kind.)

Now to the chase ... St. Peter's square is, shall we say, an oblate spheroid much like the earth. It has an opening at the upper and lower end with the 'shell' or boundary formed by the ellipsoid-like colonnades. In the center is erected a "lofty pyramid" or red granite Egyptian obelisk originally from Heliopolis, Egypt. The obelisk effectively becomes a pyramid held aloft, suspended in air. The literal meaning of the word pyramid is PYR - AMID, "fire in the middle" or "fire within". Interpreted directly, this architecture indicates there is a fire within the crust or boundary of the shell, held aloft in the void. The radiating lines of travertine on the Square's sea of cobblestone are an indication of the rays emanating from the central "fire within". The figures of god-like, marble saints, in true Roman/Green fashion, are turned inward to behold the glory of the inner realm.

One could go on and on about the mysterious and occult significance of the architecture of the Vatican, but we'll suffice by saying that it gives one pause when asking some rather obvious questions about its literal and figurative interpretations.

I see what you are saying, but those openings are on the east & west ends.

J, you're quite right! They are..... now. But remember that what is 'North' now wasn't always so, the sun didn't always rise where it does now, and that a pole shift does not necessarily mean 180 degrees. Remember also that the floating crust and tectonic plates we live upon can also shift their geographic alignment. It is entirely possible that the layout of the Vatican may be based on a much older diagram from a time when the openings were aligned north and south, and may yet become again.

Much of the symbolism associated with the Catholic Church is derived from pagan sun worship. Which is why the layout is east / west. The obelisk in the center is designed according to the shadow it casts at sunset and sunrise on the winter and summer solstices when it lines up with the four corners