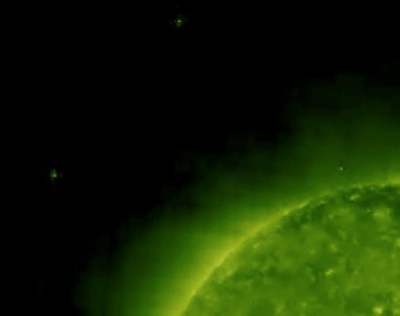 On NASA's Stereo Science Center website where they make available stereo images of the sun, a curious thing began to happen. As researchers culled over the images, they began to notice mysterious spherical, earth-sized objects in orbit around the sun, very near its surface. This confused and mystified independent researches who published their results on the web. I was one who saw the unedited images on the stereo website showing these enigmatic objects. As quickly as a stir was created, NASA pulled the images and replaced them with airbrushed versions, leaving only a faint artifact where the objects once were. When I went back to the same image I had viewed earlier, in its place was a distilled and edited copy with only a ghost of the previous artifact, barely discernable from the image's background noise.

What makes this observation curious (besides the apparent existence of a NASA cover up) is the fact that these objects orbit so close to the sun without degrading their orbit and succumbing to the sun's gravitational pull. The same concern was expressed about hot-Jupiters or ultra short period planets that orbit very close to their central star and complete a revolution in approximately one earth day, but don't experience the expected orbital drag and tidal forces that our conventional theories of gravity predict. This is a glaring loop-hole in the popular theory of gravity — the same theory of gravity which says the earth cannot be hollow. So either these objects do not exist and the earth isn't hollow, or the theory of gravity and all its supporters and proponents have made a grave error. Which is it? ... You decide. 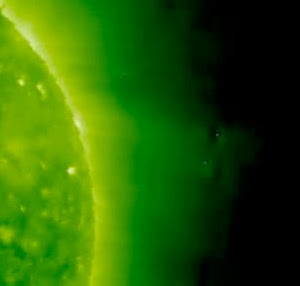 Well Shiloh you know that I already believe Never A Straight Answer (NASA) is full of crap and that many underground cities exist on this planet and many more, I'm still only about 90% sure on Hollow Earth!