The Hollow Earth: The Underworld Epic of Gilgamesh

The Underworld Epic of Gilgamesh 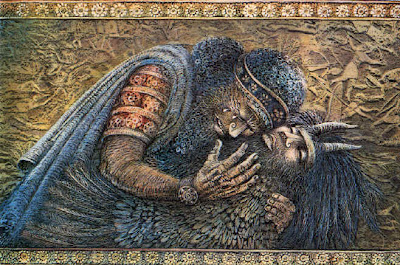 The Epic of Gilgamesh is a tale of the mighty king of Uruk that was one third mortal and two thirds god. His grief for his friend Enkidu sent him on a journey through the underworld to find his ancestor of the great deluge, Utnapishtim, who resided at the mouth of the Rivers. His journey through the underworld took him through a place of darkness for 12 leagues. Passing through a mighty mountain he came upon the place of the Underworld where he hoped his ancestor could give him the keys of immortality.

The tale of Gilgamesh is a Sumerian tale that precedes the mythologies of even the Greeks or Romans and helps us to understand just how old the stories of the underworld really are. It is apparent that the pathway to the underworld was difficult and fraught with dangers and darkness. This reminds us of the subterranean passages through the crust of the earth through which one must pass if they are to reach the land of eternal light. The Epic of Gilgamesh, though highly regarded in academic circles, is still only thought of as a pleasant mythology. I prefer to think of it as an account with some historical veracity, especially and including the part about the sacred realms within our planet.

It's not strictly accurate to describe the realm visited by Gilgamesh as the underworld. If, as it seems, it is thought of as a subterranean realm it more closely resembles the Apsu, the watery realm of Ea and source of all fresh water springs. The netherworld or underworld is described at the end of tablet seven in Enkidu's dream. It is the dry, dusty and slightly terrifying abode of the dead.

It sounds like humanity passes through some catastrophe that has them inside the Earth. I find it not a little strange that the Celts answered What is your greatest fear? with That the sky should fall. How would the sky fall? Would a shell of magnetism coated with masses of dust (ask the survivors of the Great American Dust Bowl tragedy) collapse onto the Earth?