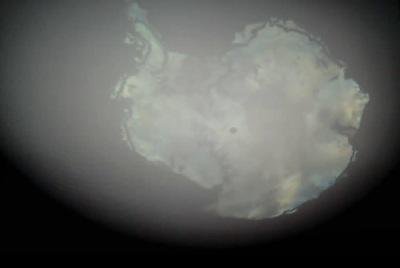 Chris, a courageous hollow earth enthusiast in Denver, Colorado was visiting the Space Odyssey exhibit at the Denver Museum of Nature and Science on April 23, 2011 where he found himself looking at a projection of the earth on a very large sphere. When one of the spectators asked the curator to rotate the poles downward so that he could look at his native state of Alaska, Chris went around to the less popular 'butt' end to see what he could see of Antarctica. To his shock and amazement he saw before him, in all its clarity, a well defined opening at the southern-most pole where one would expect to see the opening to the interior of the hollow earth. He quickly took two pictures (the other you can view here) which he then uploaded onto the web to share his experience and also his convictions about the hollow earth.

In addition to the hole at the pole, Chris points out how much melting and cracking of the ice is visible in Antarctica that is not commonly shown in current satellite imagery. This is great work from a fellow hollow earth enthusiast! Watch more of Chris' hollow earth work here.

Update: Unfortunately Chris has since removed both videos from Youtube. Luckily I have the two images you see here which contain the evidence of his discovery! 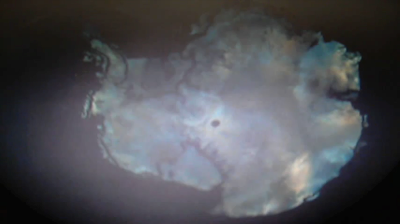 I saw his videos a while ago, great find indeed. Most interesting would be to know the company that put that giant globe in denver's museum. Where did they get their satelite data from?

weird how BOTH videos are removed, and when it says 'removed by user' that is not removed by the user, I have had plenty of friends banned from youtube, this specific message is when youtube actually takes down your account.

Geoshearer:
The "company" that put the globe (called Science on a Sphere) is NOAA, with financial help from NASA. Most of the data is available at the NOAA web site:

Chris Baird here.
cmb34@ymail.com
From most recent series. Before removing the series I let one person capture this

Chris Baird here.
cmb34@ymail.com
From most recent series. Before removing the series I let one person capture this

The other poster took down the video, but another person put it back up.

Just to make sure I gave you the right link.