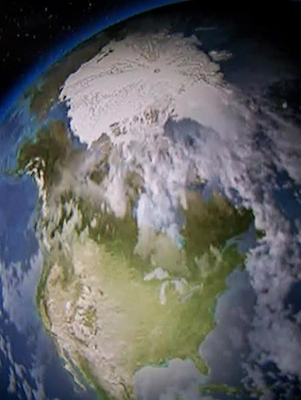 The image above shows the radial ice flow from the north polar opening to the hollow earth. This pattern projects outward from a conspicuous ring of ice approximately 80 miles in diameter. The 80 mile opening likely restricts to approximately 50 miles at its narrowest point.

According to calculations made by comparing the polar and equatorial diameters of the earth, a 50 mile opening would indicate that the crust is approximately 600 miles thick at the poles, slimmed down from an 800 mile crust at the equator.

With such a small diameter opening, it becomes apparent just how easily an "anomaly" such as this can be wiped from satellite imagery and kept from the prying eyes of the public.

I absolutely love your posts! Glad to see you are back! Thanks for the info.

Sure does look like a belly button on the Earth...now where have I heard that before...hmm...

I can't find the author's email address and my computer won't open the mail program on his email link. Please indicate your email, author of this blog. Thanks.

I'm interested in finding out more about how commercial flights avoid the hole right now-- they must be using gyros to do so-- which is a also a way to confirm the increasing curve of the polar hole. None of the north pole adventure firms that run people up to the area for 10 to 20K talk about this and when I email them, they're polite but avoid any meaningful conversation.

I tweeted Brooks Agnew last week and he said it takes more than a gyro. I don't think so. An accelerating curve with beginning at a thousand mile radius around 87.7N and 142.2E should be detectable with every current flight over the area. The denial that this info exists must be due to intentional daily suppression even by today's pilots who must all belong to a secret masonic society sworn to secrecy.

Interesting article, best regard from Belgium

Chris Baird here. On the East coast of Baffin Bay is a 500 mile wide hole the creates weather and a vortex. Between Greenland and Iceland (Franz Josef Land) is the route that Olaf Jansen took north of Greenland into the graduated polar opening. That opening is where most of the ice pack comes from.