The Hollow Earth: The Fire Within 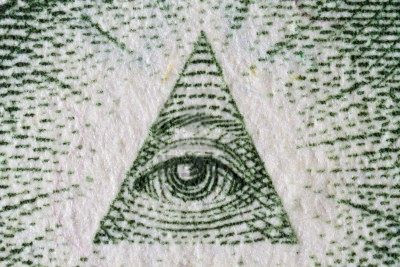 One of the most ubiquitous symbols in occult and religious lore, though very poorly understood, is the eye in the triangle. On the back of the US one dollar bill you will find the great seal. This seal is comprised of an unfinished pyramid circumscribed by an outer ring or circle. The pinnacle of the seal is separated and floating above the unfinished 13 layered pyramid. The apex is also luminescent or 'illuminated' and in the center of the triangle is found a representation of the 'all seeing eye'. Though most frequently associated with free masonry, this symbol has been used repeatedly in many religions around the world throughout history (very frequently in christianity).

As those steeped in occult traditions repeatedly remind us, the best place to hide the truth is in plain site. Secretive and occult orders achieve this by obscuring the truth behind commonly accepted symbols and practices and selling us quaint notions or interpretations of these symbols. In order to perceive the truth, however, one must look a bit deeper.

The pyramid, or the triangle, as we have learned, very literally means PYR-AMID, the fire in the middle or the fire within. It can quickly become understood, therefore, why the top of the pyramid is shown to be shining or illuminated. Very importantly, however, is that the top of the pyramid with the eye is shown to be floating in the air or suspended within the center of the circle. Other very prominent portrayels of this icon also show it surrounded by a halo of clouds. This can be recognized as the description of the inner sun given by Olaf Jansen in The Smoky God where he indicates that it is obscured by a haze or mist and the inhabitants of the inner realm refer to it as the seat or throne of their deity — thus, the eye of 'God' shown in the center of the triangle. The triangle is also a chief architectural element and because God is seen as the 'Great Architect' of the universe, His eye in the triangle is indicative of His domain.

The ever-watchful eye in the triangle, suspended and illuminating the interior of the circle, though often attributed to occult orders such as the illuminati, can and does have interpretive overtones of the mysteries of the inner realms of our planet earth.

Consider, this possibility that the inner sun is actually comprised of living beings that weave a complex energy matrix and as souls bodies die their spirit resides in this matrix until they choose either to reincarnate or stay.

Just a thought, also consider that when Adam and Eve were fired for disobeying the Universal Law or Prime Directive, that they were kicked OUT of the Garden of Eden, that's why searching for the location is like looking for the Holy Grail or the Missing Link, it doesn't exist on the surface.

Humanity needs to change it's perspective, we think too small!

I had a vision in my sleep where I saw exactly that, a sun full of souls. tinyurl.com/cosmicegg57 for the whole story.