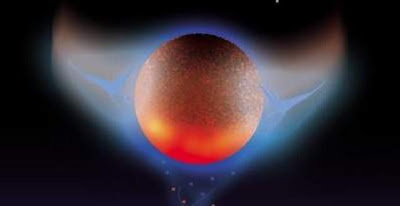 Zecharia Sitchin has become famous for his book "12th Planet" in which he wrote about a rogue member of the solar system that orbits the sun once every 3600 years. He was able to decipher this information from ancient Sumerian cuneiform tablets which describe the god-like inhabitants of this mysterious satellite. These Annunaki, as they are called, set up an outpost on planet earth and sowed the seeds of civilization that they might take advantage of earth's abundant mineral wealth. Their planet was the great winged disk Nibiru in ancient Akkadian literature (or Marduk if you prefer its Babylonian title) and is a favorite posterchild of the 2012 catastrophists.

In his book "Dark Star", Andy Lloyd discusses the enigmatic Kuiper cliff where the Edgeworth-Kuiper belt is prematurely truncated at about 55 AU. It appears, as far as experts can tell, that a large swath of the Kuiper belt has been swept clear by a massive solar body that is fixed in orbit around our sun as its binary companion. Andy suspects that it is possibly even a brown dwarf which is essentially a failed star that does not give off visible light, but instead emits a great amount of heat or radiation in the infrared spectrum. By making this assumption he is able to reconcile having a planet such as Nibiru that is inhabited with sentient life but also occupies a region of space devoid of warmth and life-giving radiation.

We have another likely explanation, however, as rogue planets could easily evolve as a shell around small, but massive stars and create a self-contained ecosystem capable of engendering life. This would provide the logical leap required to explain how an entire civilization could thrive in deep space with nothing but their own planet to sustain them — not on the exterior of the shell, of course, but on the inner surface protected from the extreme and ruthless conditions of deep space. Astronomers recently announced that there could be twice the number of free-floating, jupiter-sized planets wandering through space than there are stars in the galaxy! The notion that these spheres which are careening through space, untethered from any organized planetary systems, are capable of sustaining life is truly transformative and the ability of the hollow earth model to easily satisfy so many "inexplicable" yet observable phenomena is, in my opinion, one of its most compelling attributes.