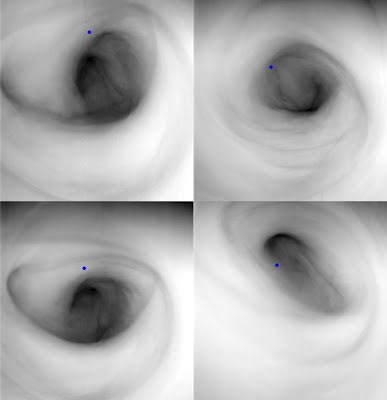 The south pole of Venus was long thought to be a double vortex, but when the European Space Agency's (ESA) robotic Venus Express spacecraft took pictures of the mysterious polar region, they observed something more akin to that of Saturn's south polar cyclone.

The swirling storm over the south pole of Venus betrays the existence of a geographical feature or polar depression and very probably an entrance to the inner world of our mysterious twin. When the Japanese Akatsuki (an unmanned spacecraft to explore Venus) reaches its destination in December of 2010, we will have even more evidence to add to the mountain of facts already amassed in favor of the hollow planets and will aid in dispelling even more of the myths, rumors and misinformation deliberately disseminated by our own space agencies and governments to conceal the truth about the inhabited inner regions of all the planets in our solar system. It is the last and greatest of the frontiers with implications that those in positions of power would be loathe to have the masses uncover.