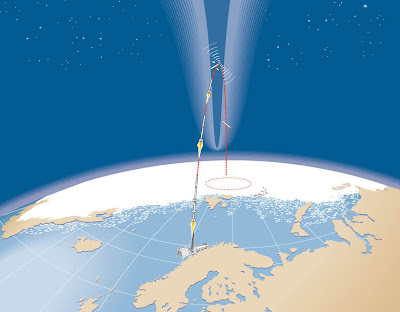 Scientists only recently discovered that the bulk of the plasma or ions that are injected into the Earth's magnetosphere are actually from the Earth's polar cleft ion fountains ... not the sun. Indeed, the Earth's magnetosphere is buffeted by solar ion winds, but what causes the auroral displays are actually sourced by ions from the Earth! While this may come as a surprise, scientists are equally as baffled and frantically trying to come up with an explanation as to how ions can become accelerated enough to leave the Earth's atmosphere and literally reach distances as far out as the moon's orbit.

The auroral rings around the poles are actually the ions from the polar cleft ion fountains coming back to collide with particles in the Earth's ionosphere after a parabolic journey through space. The colors of the auroral displays are intrinsically linked to the types of ions coming back into our atmosphere (hydrogen, helium, oxygen, nitrogen). The Cleft Accelerated Plasma Experiment Rocket or CAPER will travel directly into the north polar cleft ion fountain to try and discern its source or mechanism of ion acceleration.

It should come as no surprise that the ions comprising the cleft ion fountains are exactly what would be expected from ions from our inner earth's atmosphere together with the ions energized from the inner electric sun. The polar cleft ion fountains (CIF) and auroral displays are arguably the most compelling evidence we have to date in support of the hollow earth!