The Hollow Earth: NASA Admits 'Hole at the Pole' of Saturn

NASA Admits 'Hole at the Pole' of Saturn 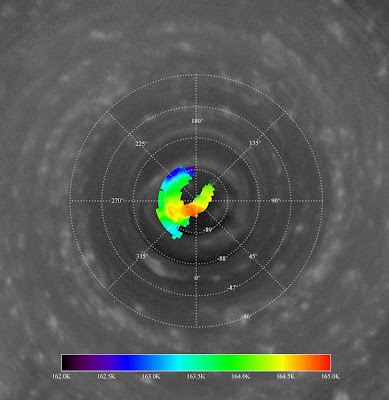 I have to admit, this one really makes me laugh. The title of this NASA article is "The Hole at the Pole" and references the vortex locked to the southern pole of Saturn. The thing that makes this ironic is that they know exactly what they are saying. They also know that the only way that a vortex storm formation could stay fixed in place, without wandering, is if the underlying land mass had a significant depression (or shall we say polar opening) to keep it firmly anchored.

The infrared overlay in the image also shows that the temperature at the exact eye of the storm is warmer than the surrounding vortex. I wouldn't put too much emphasis on the actual temperature scale as I've come to realize that the temperature measurements they report to the public are notoriously unreliable. Suffice it to say there is a significant source of heat in the hole at the pole of Saturn. This is a perfect example of how the powers that be leak the truth without actually saying anything that the public would latch onto. I can picture them laughing to themselves behind closed doors. Well, this time, we're laughing too.