The Hollow Earth: Giants of the Inner Earth

Giants of the Inner Earth 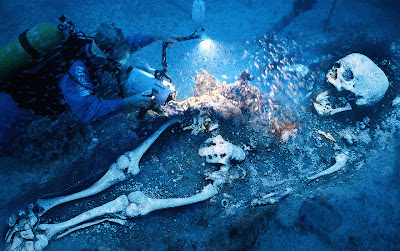 Olaf Jansen, among others (the ancient Greeks), described how the inhabitants of the inner world were easily 12 to 15 feet tall. He also explains how they lived up to 1000 years. This can be easily explained as the inner world is sheltered from the harmful cosmic rays that bombard the outer surface and cause degradations of the genetic code and also make life more difficult and harsh. Before mankind reached the outer surface, they enjoyed an idyllic paradise in the inner world.

Navajo legends also explain that once the Ancient Ones descended into the inner realms to escape the cataclysms on the surface and when they reemerged many years later, they were much taller and stronger than before. This coincides perfectly with many ancient traditions and folklore from around the world.

Below are some images put together by a very talented photoshop artist of how the remains of our giant predecessors might look like (recommended by somethgblue in this video). They are only meant to stimulate the imagination and I am not suggesting they are authentic. Get a good idea of scale, however, and you will understand the magnitude of the claims surrounding our inner earth relatives!

just work on the angle of the shadows. those tend to get noticed.

just wondering if the red haired giants are a hoax or not.There are stories that red haired giant mummys have been found in america under small pyramids.I do know they have found evidance of giants living in the blue mountains of australia before the aboriginals

Well, there is Boskop skull and I have posted a photograph of an genuine Egyptian excavation showing the actual photograph taken by the author and the artfully arranged photo of same done by the Natl Geo photog which has been shaded so the slant of the skull is eliminated. This is my deduction and no other info considered.
Gavin Mendez claims and the Oxford geneticist Brian Skykes proves that the Ojibwa are European dna. From the Cretan forerunners who mined the pure copper at UP Mich.
Is is not so hard to believe that the smarter us survived a surface catastrophe. But maybe not the radon gases released when the compression lifted suddenly. Only us, the new model, seems radon resistant.

The red haired giants are real, found in a cave in Nevada.

online courses india
simply thinking about whether the red haired mammoths are a scam or not.There are stories that red haired goliath mummys have been found in america under little pyramids.I do know they have discovered evidance of monsters living in the blue heaps of australia before the aboriginals