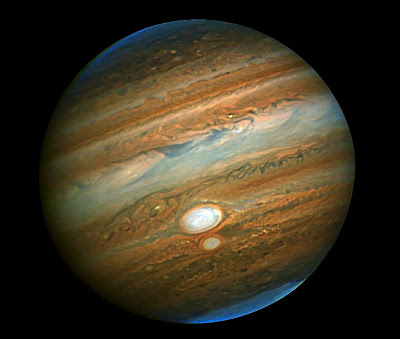 There has been some controversy regarding the core of Jupiter and it's heft and composition. All scientists can really do is gather gravitational measurements, compare them with Earth’s, and make the best educated guesses possible based upon those measurements. These measurements cause them to conclude that the core is a thick, super hot soup.

All these 'best guesses', however, depend upon the assumption that planets form into contiguously solid spheres (much like they assume for Earth). What if, however, you instead assume that all planets are hollow? How does this change the relative compositions of each of the planets in our solar system? Some sources indicate that the crust of the hollow earth is approximately 800 miles thick. If we take the mass of the earth and cause it to be distributed in this shell, instead of a solid sphere, and also do the same for all planets in our solar system, we can derive a shell thickness for all the bodies in the solar system based upon their gravitational interraction. We do assume, in these calculations, the same average density for all the planetary crusts and neglect the mass of each planet's inner star or sun. While these may not be entirely valid assumptions, it gets us on the right path.

Here are the results of the calculations:

I'm just frankly a bit disgusted with the assumption that the so called 'gas giants' Jupiter, Saturn, Uranus and Neptune are relegated to becoming nothing more than balls of hot air. I find it far more probable and realistic, in light of the evidence, to see them as planets with solid crusts that are covered with a dense layer of clouds (much the same as Venus).

I would say that the Sun is a black hole, so it's like a big bubble with the black hole as it's core. Also the gas giants are something more than planets. Jupiter protects us from meteors, perhaps those giants also feed the smaller planets? Notice how our Earth shoots out the auras right after a solar flare, almost like it eats the solar flare and produces the green magical auras as a by product of consuming the suns energy. The planets eat the suns energy and crap out magix :)

We can observe the larges animals on this planet eating the smallest of life forms. I can understand how the planets could be operating in the same way, they are literally ALIVE after all.

Fantastic! You should contact some scientists in Germany - they are most open-minded for such concept. It is time to create some professional research group on Hollow Earth.

Good to see dynamic reason/logical responses instead of firmly fixed minds that are hard-coded by university physicists :)

Velikovsky said that planets explode (his deductions based on evidence) and if large enough, coalesce. That makes sense. Planetary explosions are lacking for Mercury, Venus, Earth and Mars. So,. were those planets kept from exploding with compression?

Heya¡­my very first comment on your site. ,I have been reading your blog for a while and thought I would completely pop in and drop a friendly note. . It is great stuff indeed. I also wanted to ask..is there a way to subscribe to your site via email?

I have the best evidence for hollow planets. Go to your address bar and type in planetaryarchetypes.com (don't do a search or you'll never find it). There you can zoom in on my poster and see how the planets are formed. Steve